A group nature hike turns deadly when the animals turn into rage machines. Contending with the crazed beasts requires group unity, but ego and pride make that impossible.

This is a man-f*cked-up-the-environment-and-nature-strikes-back movie. It’s a warning for aerosol can spraying heathens to get their lives together:

This motion picture dramatizes what COULD happen
in the near future IF we continue to do nothing to
stop this damage to Nature’s protective shield
for life on this planet.

Here’s the film logic behind the disaster: thanks to the hole in the ozone layer, the levels of ultra violet radiation are rising and driving the animals mad. (I asked a scientist about this possibility and she’d never heard of such a thing.)

It’s also important to note that the animals don’t attack each other. Rather, different groups coordinate to attack the human intruders. This movie reminds me of The Warriors in a way – as the hikers try to make their way through the mountain, they encounter animal “gangs” – the wolves, the mountain lions, etc.

People in the valley are having a tough time too. There’s a rat attack that is sure to have your skin crawling.

The hiking group is diverse in a way that would please the director of diversity at Apple: a former NFL player referred to as “the cripple”, a Native American (who senses danger before the others), the ranger, an asshole business executive, a mother and her pre-teen son, a new couple, a bitter couple, a professor and a blonde news anchorwoman. Even without the extra radiation, the hiking trip sounds like a bad idea. The original plan was to spend two weeks hiking and camping with no weapons and limited food.

Paul, the business executive, is played by Leslie Neilson. Be warned: he’s not playing a comedic character. He’s the guy who immediately strikes up a conversation with the Native American and starts throwing “kemosabi” around. It’s all jokes until the animals start hunting them down.

Convinced he’s the smartest man around, Paul challenges the guide’s leadership. The group splits in two. Guess who becomes more vicious than the wolves? Once he is in charge, Paul gets to act out his Lord Of The Flies fantasies. 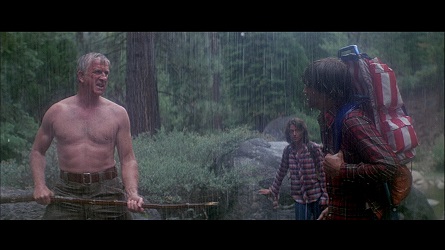 The other faction is much more cooperative. There are moments of bravery and self-sacrifice. The animals pick a few off from each group, but they don’t have to worry about a human villain.

Heavy drama mixed with savage animal attacks – this movie is a winner.

Tips:
*The racist is a sexist, trust me on this.
*Dogs are just pretending to be goofy and lovable – they hate you. They really,
really hate you.
*House cats are indifferent to your existence no matter the UV levels.