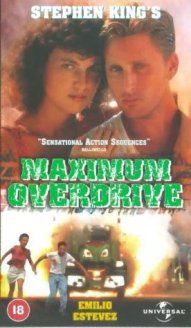 Thanks to a mysterious comet, machines on Earth spring to life and finally take revenge on mankind. Our story centers on a group of people holed up in the Dixie Boy truck stop. They are menaced by a group of trucks that don’t want them to leave. Fighting back only yields momentary victories. Understanding that they are facing a future at the mercy of motor vehicles, the survivors make a dash for freedom. But in a world where man depends on machines, where can they go…

Though it drags from time to time, Maximum Overdrive is one of those so bad it’s good horror movies. Written and directed by Stephen King, it’s based on his short story “Trucks”. The film would have been more fun if it had been man vs smaller appliances. You get a taste of this in the beginning when an electric knife strikes out against its human oppressor, a waitress. Most of the handheld horror is in glimpses – a corpse struck down by a portable cassette player, a woman who can’t let go of her hairdryer even in death.

The problem with having killer trucks is that you really have to help them kill you by staying still, walking out in front of them or running in a straight line. For a good chunk of the movie, the trucks just circle the gas pumps. They are so helpless that they literally have to call in a military gun thingy – ahem – an M274 Mule. There’s also a montage of humans being forced to fill up the mean machines’ gas tanks. You may want to refresh your snacks during this time.

One great thing about this movie is that it is full of familiar faces and voices. There’s Emilio Estevez, Pat Hingle, Frankie Faison and Yeardley Smith. Before he was Buggin Out in Do The Right Thing, Giancarlo Esposito was videoplayer in Maximum Overdreive. He has the best line in the film: “Yo Mama.”

Tip:
Shouting, “We created you!” is not a good argument when machines attack.