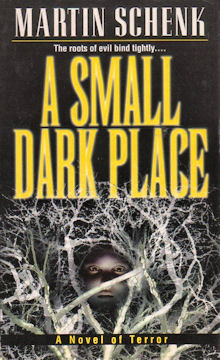 A Small Dark Place by Martin Schenk (1997) is a horror novel that is broken into two parts. In part one, Sandra and Peter Wiley are on the brink of financial ruin. They have been struggling for years and have enemies dedicated to seeing them suffer and fail. Then, Sandra remembers an event from her youth—the riveting rescue of Baby Carlotta. The country fell in love with Baby Carlotta when she fell into a dry well. The rescue took several days, but she was pulled out of the hole alive and (thanks to donations from well wishers) one hundred thousand dollars richer.

Desperate for cash, Sandra and Peter decide to create their own Baby Carlotta moment by having their son Will fall into a similar type of hole. They set a “trap” for their boy and wait for him to cry out. Unfortunately, it is their daughter Andromeda—a child who is frightfully afraid of the dark—that falls in.

Part two is set in the present, roughly 1997. Andromeda is all grown up and coming back home. The rescue had various affects on people and the prospect of her return is just as exciting/anxiety producing. While the town is ready to have a parade and herald the return of their favorite daughter, Andromeda is ready to settle some old scores. She learned a lot in that small, dark place and she’s ready to show the world.

The book does a great job with the parents. You really do understand how they got to a point where exploiting a child like this seems like a viable option. At the same time, the decision isn’t an easy one. If they don’t do it, how far down in metaphorical darkness will the family fall? Could the family even survive? If they do it (and they do), how will that change the relationship dynamics? Can you really justify endangering a child for the greater good of the family?

At the same time, this is a horror novel. So, plenty of one dimensional characters abound but they don’t need to be fleshed out beyond their relationship with the Wiley family. It was a fun read for me, especially since I remember the real-life Baby Jessica incident.

If you were born in the mid 80s or later, you probably don’t know anything about Baby Jessica. On October 14, 1987, 18-month-old Jessica McClure was playing in a backyard with other children when she fell down a dry well. It took rescuers two to three days to get her out. Thanks to round the clock cable news, the nation watched every step of the rescue.

There were images of her parents at the top of the hole talking to her, singing songs. Experts behind desks explained how the rescuers planned to drill a parallel tunnel so that an adult human can get down to her level set her free. There were interviews with neighbors, background pieces on the community—saving this little girl was an event.

To my memory, it was acknowledged as a freak accident. No one blamed the parents. There were no threats of taking the baby away. People sent prayers, cards and money – not death threats. This was pre-Internet, people with horrible thoughts didn’t have a venue to instantly and anonymously share their venom with the world.

Once Baby Jessica was pulled out of the hole, there were a few immediate follow up national stories to assure everyone that she was physically and mentally healthy. She met President Bush (the 1st one). Then, the news cycle moved on.

If you want to learn more about Baby Jessica, many stories about her are archived here: Baby Jessica Rescue Page