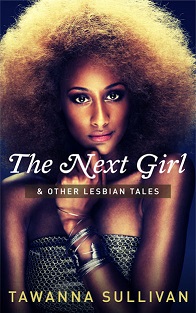 The Next Girl & Other Lesbian Tales is now available via Amazon and Kobo.

A collection of previously published stories, The Next Girl & Other Lesbian Tales is an eclectic mix of black lesbian fiction. These are stories of love, lust, desire, mystery, and revenge—with a touch of humor here and there.

Several tales delve into the up-and-down nature of relationships. When Narcia loses her lust interest to her best friend in The Next Girl, long held resentments rise to the surface. After a disastrous day, lovers in The Getaway take an impromptu trip and reaffirm their commitment to each other.

In Losing Michelle, a horror writer wishes her partner would leave her alone—until the woman goes missing. Originally published under the pseudonym Evelyn Foster, In Remembrance of Her finds a woman negotiating with dark forces in a quest to save her lover. Despite rumors, Chante is drawn to the mysterious Diana in The One Who Got Away.

Themes of community and forgiveness are also explored. In Operation Butch Ambush, rival factions come together to save women from a nefarious group that reprograms butch lesbians who have strayed from strict gender roles. Aria comes home from a hellish week at work to a nasty surprise in Cat and Mouse. In The Homecoming, it’s a funeral that prompts Melanie to revisit the past and her fractured relationship with her family.

Also included are flash fiction pieces with bite. Famished and Witness are about different forms of hunger.

Spanning a decade, these pieces reflect the political and social realities of their times. For example, before same sex marriage or civil unions, a lesbian couple who wanted their union recognized in some legal capacity could get into a domestic partnership (if their municipality offered it).

I enjoyed writing these stories; I hope you enjoy reading them.