← Terror Tuesday: House (1985)
Terrific Tuesday: The Gospel According To Andre →

A duo who creates fake ghost/monster hunting videos for Youtube comes up with a great idea: film a documentary about real people who believe they are monsters. They rope in two more folks (a fellow fighting drug addiction and an ex-girlfriend) and set out to interview a supposed tattooed vampire, a body-camera wearing skinwalker and girl possessed by a demon.

Did I mention this documentary was being filmed in a boarded up house that has been the location of satanic rituals?

The Monster Project spends a healthy time trying to establish characters and relationships to foreshadow upcoming conflicts, etc. The filmmakers weren’t that exciting – just love triangles and typical drama. I wish the film had spent more time getting to know the monsters outside of the house. It could have been a day-in-the life of these normal people who believe they harbor dangerous, terrifying secrets.

Things don’t really get going until they get to the house where – aaahhh real monsters! Do you know the chase scenes from Scooby-Doo where they run from room to room? That’s what happens here with shrieks, gurgles, growls and bloodshed.

As a found footage film, there is an explanation – sort of – for the multiple points of view. The filmmakers have cameras, the house has cameras everywhere, etc. However, there is a scene that we get were a camera recording it is completely illogical. That was a distraction for me.

The ending is one that you may not see coming but the film does throw out a few clunky clues early on. 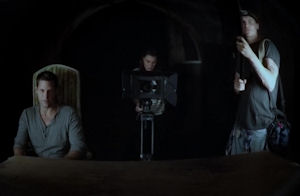 Tip: Don’t work with your ex.

Note: There a completely unrelated organization called The Monster Project that encourages kids to “pursue their creative potential.”

Sometimes writer, most times editor. Lover of mysteries and 70s/80s horror movies. Author of The Next Girl
View all posts by Tawanna »

Posted on May 22, 2018, in Just Fun, Lessons From Horror Movies, Movies & TV, Tuesday Terror. Bookmark the permalink. Leave a comment.

← Terror Tuesday: House (1985)
Terrific Tuesday: The Gospel According To Andre →