Seven twenty-somethings decide to have one last wild adventure by spending the night in a haunted hotel. The plan is to investigate an infamous room and pull pranks on each other in the darkened hallways.

After a brief intro to the characters, the story gets them quickly to the hotel. Even though the building is the site of numerous deaths, the group takes no precautions. The hotel purposely draws them in. After a few creepy incidents, they find the room and an evil spirit bent on their destruction.

Horror Story is an action-packed, haunted house flick with deaths a plenty. However, it’s not a very graphic flick. The frights comes from the building and releasing of tense moments.

Grab a bowl of popcorn and settle back for some fun. 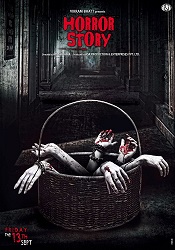