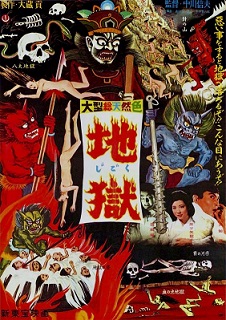 Have you ever had a day where every decision you make is a bad one? The shortest line in the grocery store turns out to have a cashier who is hungover and no longer sure how to work the register? Get bluffed out of a winning poker hand? Did you take a shortcut that made you 45 minutes late? This is the movie for you!.

Meet Shiro, a man who wants to be honorable but has a knack for making the wrong decision. The man attracts death; he puts Jessica Fletcher to shame.

Shiro has been courting Yukiko, the daughter of one of his teachers. Just as the professor is giving the couple his blessing to wed, evil asshole Tamura pops in to cast his nasty shadow on the event.

Tamura gives Shiro a ride home. Along the way they run over a man and flee the scene. To be fair, Shiro does want to stop but he’s not the driver, so… Once Shiro discovers the victim has died, he decides to go to the police with Yukiko and tell the truth. She wants to walk to the station; he insists on taking a taxi. The cab crashes, killing Yukiko.

Guilt ridden, Shiro visits his parents in a rundown nursing home. Meanwhile, the two deaths have also destroyed other lives. Loved ones of the dead seek out Shiro for their own purposes. Then, Tamura shows up. Lies, deception and anger swirl around propelling everyone into a living hell.

When Shiro dies, it is revealed that the torment he has suffered on Earth is only an appetizer.

The Buddhist version of Hell (aka Jigoku) is gory. Bodies get sawed in half, teeth get smashed in, etc. However, these are 1960 effects. Some may find this depiction visually disturbing, but it’s not vomit inducing torture-porn.

What’s worst than the physical torment? Characters who lied while alive are propelled to tell the truth.

Watch this movie and get your eternal life together.

Tips:
-Your evil friends are not your friends. They will turn the poison on you eventually.
-Seriously, get your life together.

One thought on “Tuesday Terror: Jigoku/Sinners Of Hell (1960)”