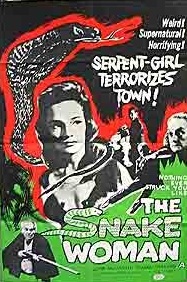 In ye bad ole days (early 1900s), a small English town is hit be a wave of deaths via snakebite. Could the local myth of a beautiful but deadly serpent girl be true? Well, duh! This film is about educated medical men finally catching up with local and folk wisdom; it just takes a death or ten for them to figure it out.
As our story opens, we learn that a scientist has been treating his wife with snake venom for an unspecified illness. The woman is afraid this cure is having a detrimental effect on her unborn child. The husband dismisses her concerns.
When the baby is born (the mother doesn’t make it), the midwife knows something is unnatural about the child. The infant is cold and never closes her eyes – traits of a snake. She believes the baby is evil and should be killed.
The scientist/husband and the doctor, however, are fascinated by this and want to keep the baby alive to study it. As the mid-wife rallies the townspeople to action, the men flee with the baby. They almost immediately give it to a stranger to raise.
From here, our were-snake grows up on the outskirts of the village. She attacks people for the hell of it. Luring men and boys close while in human form, she transforms into a giant snake and sinks her teeth into them. We don’t see any of the murders – this is a 1961 film – but reactions from townspeople suggests the deaths are horrible.
Meanwhile, a hip, new man of science in the village. Eventually, he’ll come to realize that the midwife and townsfolk aren’t superstitious fools.
There are so many unanswered questions: why does the snake woman wear clothes? Is she slithering down to the village at night and stealing the latest fashions? Perhaps she’s robs women…is frock-jacking a thing?

Tip: Sure, follow that sexy, mysterious women into the woods. Make sure your have your affairs in order first.

Sometimes writer, most times editor. Lover of mysteries and 70s/80s horror movies. Author of The Next Girl View more posts