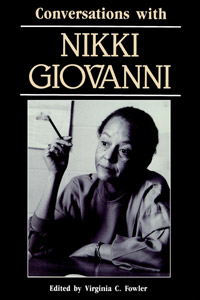 The is a collection of interviews with and articles about Nikki Giovanni from 1969 to 1992. The pieces are in chronological order and it’s interesting to see how her views on a host of subjects (writing, poetry, racism, sexism, revolutions, movements etc) shifted over the years. At the same time, the “Nikki” that we “see” is also influenced by the point of view of the interviewer–through the questions they ask and their additional commentary.

It’s hard to pick out highlights, but you absolutely have to read the pieces where Ms. Giovanni is in conversation with older civil rights/black lit icons:
*an excerpt from A Dialogue (1973), where a “young” NG talks with James Baldwin about “the black male” and responsibility
*an excerpt from A Poetic Equation: Conversations Between Nikki Giovanni and Margaret Walker (1974), a “hot” conversation about generational differences in response to violence, individuality vs community responsibility, etc.

I am tempted to pull out quotes–there are some great zingers here (especially in regards to her early 70’s views about the feminist and unisex movements)–but I really think they should be read in context.

Okay, maybe a couple of quotes. This is from a 1983 interview with Claudia Tate where Nikki Giovanni explaining why she doesn’t read her older prose pieces (p 145):

“But I’m very much afraid to be trapped by what I’ve said. I don’t think life is inherently coherent. I thing what Emerson said about consistency being the hobgoblin of little minds is true. The more you reread your prose the more likely your’re going to try to justify what you’ve said.”

“If I never contradict myself then I’m either not not thinking or I’m conciliating positions and, therefore, not growing. There has to be a contradiction.”

This is a book length essay in which James Baldwin talks about his relationship with movies/film. It’s personal reflections and autobiographical bits filtered in with observations about movies and, to a smaller degree, theater.

Seeing “classic” movies through the eyes of Baldwin was really eye opening for me. For example, I’d never thought about how a black person who lived through the 40s, 50s and 60s would view the (race fantasies?) In The Heat Of The Night (1967) or Guess Who’s Coming To Dinner (1967). I felt a powerful “yeah!” is the scene where Endicot and Mr. Virgil Tibbs exchange slaps:

But in 1967 would a black audience have rolled their eyes at this? Would the reality of life hinder a suspension of disbelief. Heat and Dinner were written for mainstream audiences, feel good movies about progress. Well meaning, but for Baldwin, missing the mark in so many places…

He talks about Lady Sings The Blues in contrast and comparison to Billy Holiday’s real life–as well as his own adventure as the writer a biographical screenplay in Holiday. Basically, never forget that every biography you see on screen has been crafted for entertainment and not truth.

Another great thing about this book is that it introduced me to several movies that I’d never never heard of. Before the 70’s horror movie with a similar title, there was I Spit On Your Graves (1959). According to Mr. Baldwin, the film version (like most adaptations) veers away from Boris Vian’s 1946 novel–which I’ve put on my reading list.

Let’s have a quote from this one, too. In discussing the the superiority of theater (not the sanitized, Broadway version) over movies (p 35):

Picture it: you are a Jewish police detective suddenly assigned to a special, secret division that handles particularly unusual murders. You get to a crime scene and find clues that suggest that this strange, new killer appears to have ties to the Jewish community. The more you delve into the investigation, it becomes clear that this murder is not a singular event. In the midst of the human carnage, could there be a supernatural force for Justice muddying the waters?

This book is over 500 pages but it’s a fast paced and action packed. There’s a likeable but flawed detective, a mysterious woman and an intriguing case that incorporates Jewish culture and mythology.

Don’t know what a Golem is – it’s a man-made creature made of clay created to serve a master. Think of it like Frankenstein but powerful Rabbi and clay–not mad scientist and stitched up body parts. Actually, the concept pre-dates Mary Shelly’s Frankenstein and it’s thought that she was inspired by Golem mythology.