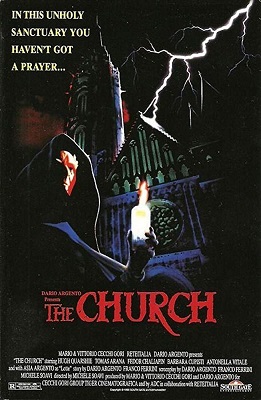 Knights Templar destroy a village full of people who worship the wrong god. They erect a cathedral on top of it. There’s a special cross in the basement to seal the evil in.

Fast forward to 1989. The cathedral is abuzz with activity – people coming for confession, a wedding party, researchers and a bunch of other extras (for a nice body count).

The church is being restored. A layperson discovers the seal and decides not to tell anyone. Opening it by himself, he thinks he’s about to discover Templar treasure. He finds a whole mess of demons instead. The church goes on lockdown and a host of demons set about possessing and killing folks.

Horror master Dario Argento is one of the writers, so you know you are in for a good time.

One of the heroes is a young, black priest. Hugh Quarshie plays Father Gus. He and those left alive must find a way to vanquish the demons and open the church.

Unlike zombies, demons have their own particular quirk when it comes to tormenting and snatching souls. This gives room for the special effects artists and designers to be creative.

If you’ve never seen The Church, treat yourself.