Midsommar (aka How To Lose A Guy ‪In 9 Days) is about recognizing and letting go of bad relationships . . . while observing rituals in an isolated Swedish village. The relationships are truly awful and the villagers are sadistic murders (who wear the most angelic white).

Christian and Dani should have broken up a year ago. Honestly, they probably should have never gotten together. She is an emotional drain on him and he can’t even come close to giving her the support that she needs. He is with her out of guilt and she clings to him because he’s all she has left.

Or, at least that what is given to us as Christian’s motivation but I don’t believe that. He strikes me as the kind of person who will never break up with someone because he doesn’t want to be seen as the “bad guy”. He’d rather treat someone bad enough (inattentive, boring as hell, perhaps emotionally abusive) so that they will break up with him; nothing will be his fault. In any case, the relationship is a triple slow motion train wreck.

While the emphasis is on the couple, all of Christian’s relationships are terrible. That group of guys he hangs out with – I believe they all go to the same college – are no more than familiar acquaintances. They are supposed to be close: he complains about Dani to them, this trip to Swedish countryside was originally a “boys only” trip, etc. Scratch beneath the surface and you’ll find more jealousy than friendship. This is how the villagers are able to dispatch them one by one without any of the others becoming too concerned about the disappearances.

Outsiders allowed to observe an isolated tribe or village (usually folks of color) is an old school Hollywood plot. The explorers typically think of themselves as superior to those they are studying; there is usually more than a hint of danger and savagery.

Our happy, drug-sharing Swedish villagers don’t inspire terror at all. At least, not at first. They wear white, dance and have many feasts. The young people leave the village and even go to college. When the curtain is drawn back revealing the first bits of brutality, Christian and company can’t imagine that they themselves could be in trouble. Arrogance keeps them from recognizing that death creeps around every corner of the barn and hides under welcoming smiles. 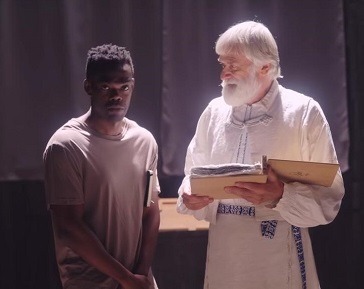 This is personified in Josh, the scholar without any sense of self preservation. As someone who has been studying European Midsommar rituals, why didn’t he get any inkling that something was up? Like the scientist in a sci-fi movie, he has no qualms watching others die in his pursuit of additional knowledge. If you want to do a deeper dive into the Josh character, Mary Kay McBrayer has an essay on Graveyard Shift Sisters that explores Midsommar and stereotypes.

In the end, Christian and Dani have to come to terms with their relationship. When she realizes her situation with Christian is unbearable, she does the reasonable thing and frees them both.

Now, when I’m out in about, my eye can’t help but notice couples that have that “Midsommar” look – one of them looks anxious, the other resentful. I want to pass them a note: “Break up before it’s too late!” They are one festival away from disaster.

Tips:
-Don’t ignore horrifying screams – even if you aren’t sure where they are coming from.
-End bad relationships before they end you.