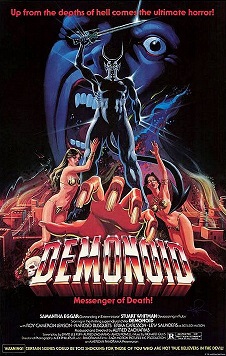 After a couple unwittingly releases an evil force, the wife searches for her now-possessed husband. Her efforts to thwart the demon’s plans don’t go unnoticed and soon she becomes a target. Can the wife find a way to send the entity back into the fiery depths of hell or will she get caught in the grip of evil?

In a lot of ways, Demonoid sounds like a typical horror movie. The trouble begins because a white couple doesn’t head the warnings of Mexican mine workers. The locals are just superstitious, you see. As owners of the mine, the couple decides to go deep inside in an attempt to shame the workers for their fear.

What happens when they stumble across several mumified corpses and an altar? They take one of the objects – a box – from the underground temple back home. After a few drinks, the husband decides to open the box; it appears to be full of sand. Little does he know that tampering wih the box has sealed his fate.

The unusual, fun part of this flick? These folks are being plagued and possessed by a demonic left hand. Imagine Thing from the Addams Family out of its box and roaming the streets for a host. Once this evil left hand is interlocked with the fingers of a human’s left hand – the party begins!

Some embrace the evil and give themselves over to it. Others fight against it. How do you get rid of an evil hand? You chop it off. Once you no longer have a left hand, the demon must be on its way. How do you defeat it? That’s quite a different matter.

One warning, the film begins with a bunch of people in pointy, hooded robes running through the mine. A woman’s clothes are ripped (her breast pop out), chained to the wall, yada yada. It very briefly resembles a horror-bdsm themed movie and feels out of place. It’s as if a producer realized they didn’ have any tits in the film and they needed to add an extra scene.

Full of dramatic chases and hand chopping, Demonoid makes absolutely no sense. Thankfully, it doesn’t have to – this is the 80s. 🙂