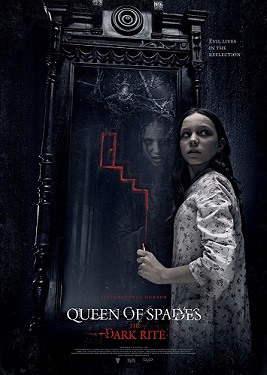 Russian teens gather in front of a broken mirror to evoke the spirit of the Queen of Spades. The kids soon discover that the Queen is no urban legend and she is now attached to them. Haunted and hunted by a vengeful spirit, can they find a way to escape from her clutches?

The Queen of Spades is the Russian equivalent of Bloody Mary. Grab a candle, get in front of a mirror, use lipstick to draw a door and steps, close your eyes and call her forth. If you are successful and she appears – congratulations! Now that you have summoned her, she can appear at will in other reflective surfaces. Eventually, she will cut your hair. Then, she will kill you.

Why call her up in the first place? Teens will be teens.

Actually, what starts out as a teen horror flick transforms into a “father will do anything to save his daughter from the demon” flick. The Dad of the youngest girl is summoned to his (ex?) wife’s apartment because the kid is acting strange. He doesn’t believe his daughter at first. He thinks her friends put the idea in her head and her imagination is working overtime. He only recognizes the danger she is in when the Queen of Spades begins following him around, too.

(The girl’s mother disappears for a nice chunk of the movie. I assume she and the other missing guardians are working…)

The movie does do some interesting things. When it’s time to contact the spirit a second time, the kids gather around a walkie-talkie instead of a Ouija board. Rather than an internet search montage to find background info about the Queen or the ritual, this film does something a little old fashioned – a figure cloaked in shadow who gives them advice. Our shadow man has tangled with her in the past but didn’t score a clean victory.

Queen Of Spades has a problem with keeping the tension high. Here’s an example not related to the haunting. Dad is a mechanic who is using a client’s car to drive around. Early on in the film the client threatens to call the police and report the car stolen. It’s to show that the father is jeopardizing his business and freedom for the sake of his child. The car never gets returned but the threat just vanishes.

While not exactly by the numbers, this film was obviously influenced by a lot of other horror movies. The creature looks like an older version of Mama. The father goes on a “Ring” type of quest. How does he get cursed? By watching a video of the ritual. The writers also stirred in a little Exorcist for good measure.

Do you want to summon the Queen of Spades – the movie is missing part of the ritual but all the details are here. A word of advice, make sure you understand how to get rid of her before you call her. 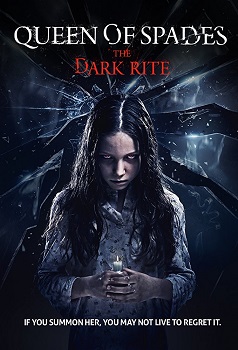