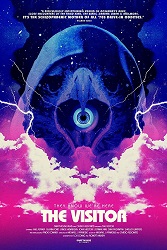 It’s obvious what this movie is about from the poster, right? Let me help…

A woman is an unwitting pawn in a struggle to keep an ancient evil, Sateen, at bay. She already has one child – a daughter – tainted by unholy influence; a second chid would burst the gates of hell wide open. Will the corporate cult who is ready for the ultimate hostile takeover get it’s way or will an unusual visitor (John Huston) thwart their plans?

Let’s Get Barbara Pregnant – that should be the name of this movie. Barbara is out here trying to live her best life. A divorced mother of one, she wants neither another husband nor another kid. Her boyfriend (Lance Henriksen) is ready to take their relationship to the next level and her kid is pestering her for a little brother.

Barbara is a carrier/host of an ancient evil that periodically is reincarnated on Earth. She’s not possessed herself – but any children that she has will be full of wickedness. Unfortunately, she has no clue why her life has suddenly come a series of harrowing events.

The title character is an otherworldly fellow who has tangled with Sateen in the past. He wants to protect both mother and daughter but the little girl isn’t really interested in being saved.

The Visitor has a lot of influences: The Omen, The Exorcist, Rosemary’s Baby, The Birds and probably more. Despite this, it’s a bit of fun with lots of unexpected twists. In fact, there’s so much happening visually, it is easy to lose track of the plot. Recommended but don’t ask any questions; just let it wash over you. 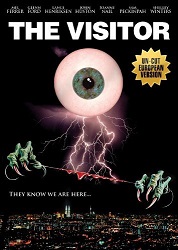