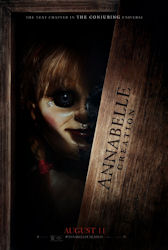 Annabelle: Creation is a vast improvement over Annabelle. There’s actual action, suspense and a few scares that aren’t spoiled by the trailers. The acting is solid thoughout – even if the script requires the characters to walk into harms way. I didn’t realize the movie was rated R, so I was surprised when the movie “went there” so to speak. This movie is “haunted house” style fun.

It’s best to see the movie without viewing the trailers first. Beyond jump scares, the big “reveal” as to the how/why of Annabelle is basically explained in the trailer. I was waiting for there to be another big secret in the third act. There is a reveal that cements Annabelle: Creation to the first movie, but it didn’t feel like a big enough revelation to me. My reaction to it was “oh, okay” not “wow”.

I’m interested in finding out how the character of Mrs. Mullins, the woman of the house, evolved through the finalizing of the script. In a scene that takes place before tragedy befalls her family, a man asks Mr. Mullins a question but it’s Mrs. Mullins who gives him the answer. I don’t think Mr. Mullins even attempts to give a response. I get that feeling that she is the one who made the decisions while he went along for the ride. My guess, and this is just a theory with no foundation, is that Mrs. Mullins had a bigger role that was reduced and visual references to the demonic nun were shoe-horned in.

Any way, some other observations:
*If Samara had come up out of that well…
*Did no one vet the Mullins before allowing kids to live there? The Church doesn’t keep records?
*Creepiest house decorations ever – hanging dolls, outfits just hanging on doors for no good reason.
*Nothing against Sister Charlotte, she is a faithful protector of all in her care – but the Catholic Church has lost it’s banishing evil mojo.
*Is that Annabelle? Nope, just my knees and ankles cracking.