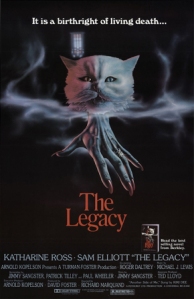 When I was a kid, I had a daydream that one day someone would show up with a letter declaring that I was the long lost relative of an insanely rich person who lived overseas. It would be the start of a great adventure that would end in me swimming through gold a la Scrooge McDuck.

Lucky for me, that did not happen. Horror movies prove that being called off to foreign lands to claim your rightful inheritance can be deadly.

In the Legacy, Maggie Walsh (Katharine Ross) is an architect hired to work on a castle/mansion in the countryside. When she arrives with boyfriend Pete (Sam Elliot) in tow, she discovers there is no job—just a weekend gathering of some of the wealthiest people in the world. Her would-be boss is on the brink of death.Those gathered are waiting to see which one of them will inherit his vast fortune.

When the assembled start to die off under strange circumstances, one has to wonder if there is a killer among them or if a supernatural hand is pulling the strings.

This is a fun movie. All of the prospective heirs have committed evil acts in the past. What’s (another) murder or two if it means coming into the ultimate fortune? Maggie and Pete are the only innocent guests in the batch but innocence is no protection against fate.

Pete is a very interesting character. He wants to take care of and protect Maggie; the “we need to get out of here” instinct kicks in pretty quickly. Yet, he can’t make a great escape happen. He’s worried but manly. Circumstances that would scare others don’t bother Maggie too much.

The staff of the castle isn’t put off by the deaths at all. They’ve seen the process so many times before…

Tips:
1) Be careful when you make a deal. The devil is in the details.
2) When you inherit something, you get the history/horror/baggage that comes along with it.