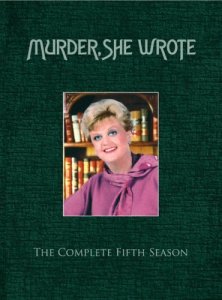 What I Learned This Week: Many of the guest stars in the Fire Burn, Cauldron Bubble episode of Murder, She Wrote (1989) were also featured in 80s horror films.

I used to watch this show with my grandmother on, I think, Sunday nights. She recognized many of the stars and I was proud of myself when I started figuring out who did it before Jessica did.

Watching the series now as an adult (via Netflix), I’m picking up on lots of themes that were over my head. For example, there are quite a few episodes that feature a younger man/older woman romance. Also, what’s interesting to me is how Cabot Cove changes through the series. It goes from being a quiet coastal town to a place where rich/affluent outsiders will call you out of the blue willing to pay a small fortune to buy your home.

Anywho, the series itself was just good, murderous fun. In Fire Burn, Cauldron Bubble, the ghost of a witch who had been burned at the stake has returned to Cabot Cove. Also, the author of a book about that witch is in town to drum up publicity. Hmmm, I wonder if these two events are connected…

Sometimes writer, most times editor. Lover of mysteries and 70s/80s horror movies. Author of The Next Girl View more posts