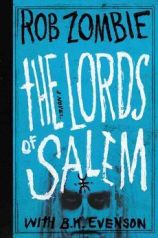 So, I read the novelization of the upcoming Rob Zombie flick, The Lords Of Salem. Ho Hum. I blame this purchase on SimCity servers not being readily available.

Oh, you want to know what it’s about? Okay.

In ye old Salem, some witches (all women) get caught conjuring up Satan. They are interrupted by men (some more God-fearing than others) who torture and burn them alive. As the women are being engulfed in flame, one vows that witches will have their revenge on the descendants of their tormentors.

Fast forward to modern times. Heidi, part of the afternoon/evening crew of a local radio station, gets a box with a strange record. She plays the record live on the air. Bad things happen.

If you haven’t guessed it, Heidi is descended from one of those God-fearing, witch killing fellows.

Just a few, observations:
*There’s plenty of blood, grisly killings, chants, hallucinations…everything.
*The people worshiping the Devil refer to the Other deity as the oppressor. However, I can’t see where the Devil treats his followers any better.
*Be wary of older women–especially if three together–who offer you tea. Don’t drink it. Seriously.
*I’d like to see what happens 5 minutes after the book ends… When the police show up and folks have some explaining to do.
*I wish I had seen the movie first. Sometimes, getting a peak into the mind of film characters is just–pardon the expression–overkill.

One thought on “The Lords Of Salem”