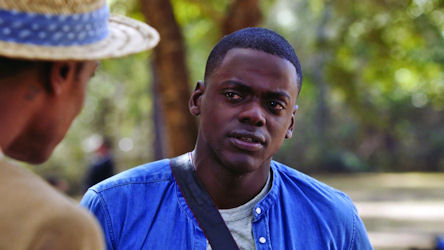 After I saw the first trailer for Get Out, I had no intention of seeing it in the theater. I thought, “I’m not going to spend two hours watching a black guy being terrorized.” Then, it came out and the reviews made it clear that I had the wrong impression of the flick. It’s a horror satire with a few laughs here and there.

So, I finally made it out to the movies and it’s as great as all of the reviews made it out to be. For me, it was great to identify with the main character; that’s rare for me with horror movies. Having someone to root for is awesome.

Anywho, some thoughts:
1) I bet Chris didn’t bring Rose around any of his friends. She wouldn’t want that anyway–so no one could point a finger at her when she went missing. I wondered if he tried though.
2) Perhaps because Georgina-Grandma keeps admiring her new body, the real Georgina inside still catches glimpses of herself (even though she is in the sunken place). Maybe this is why real Georgina struggles to come to the surface even without the benefit of a camera flash. Real Georgina first tries to emerge when she spills the iced tea. She next struggles to come out when the tears stream down her face.
3) A think piece on class in Get Out could be interesting. (Working Class Rod and Creative Class Chris.)
4) The Armitages are the type of people who would be offended if you called them racist while they are violating you. (I imagine Rose all over twitter, alternating between anger and crying over the insult.)

And some lessons:
1) Don’t mistake desperation for love, forgive yourself/see about healing childhood trauma and always have your own ride. Always.
2) All of your skin folk definitely ain’t your kin folk.
3) Listen to your ancestors. (If you can’t hear them, that’s a whole different problem.)