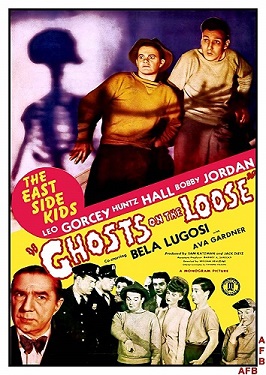 The East Side Kids, like Our Gang or The Bowery Boys, is a film series featuring a group of (mostly) working class  boys who have various comedic adventures.

What hi-jinx do they get up to in Ghost On The Loose?
Protecting a Nazi propagandist.
Yes, in 1943. During World War 2.

The sister of one of the boys just got married. The boys decide to clean up the newlyweds’ new house while they are on their honeymoon.

As the boys set to work, they make a startling discovery: brother-in-law is a Nazi propagandist. How do they know? There is a printing press in the basement that cranks out pro-Nazi pamphlets.

To paraphrase the leader’s reaction and next steps:
“Oh no, he’s a Nazi sympathizer! I’m so disappointed in him. He’ll get in trouble if anyone else finds out. We have to save him – let’s hide the press and the pamphlets next door.”

There’s no “Call the police!” and no concern that sis has married a trash individual.

Now here’s were the comedy comes in. Turns out the boys are cleaning up the wrong house! The newlyweds bought the house next door. When they move the printing press next door, they are actually putting it in the newlyweds’ house!

Bela Lagosi and his crew are the real Nazi propagandist. They are trying to scare the boys out of their hideout and steal the printing press back.

Of course, it all works out in the end and the correct people are carted away by the authorities. There’s a sight gag about measles or chicken pox thrown in – they show up as swastikas.

I’m sure this was a real knee slapped in the 1940s but, in an age where “if you see something, say something” is plastered all over NYC subway cars, it falls flat.

Sometimes writer, most times editor. Lover of mysteries and 70s/80s horror movies. Author of The Next Girl
View all posts by Tawanna »