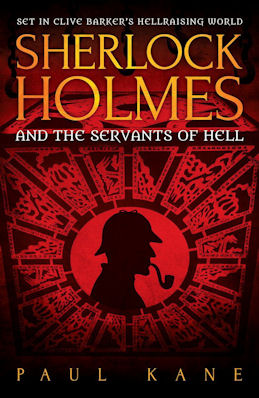 Sherlock Holmes And The Servants of Hell by Paul Kane

It’s 1895. Sherlock Holmes’ has returned to his home in Baker Street after being presumed dead. Having defeated Moriarity at Reichenbach Falls, he is a changed man – bored with life. With no arch enemy, life holds little to no meaning for him. He disappears for days at a time— indulging in drugs, exposing himself to deadly disease and other activities not suited to a man of his esteem. Easily solved cases do nothing to stir Holmes imagination.

Watson cares for his friend the best that he can. A doctor, he felt helpless when his beloved wife suddenly fell ill and died. Fighting his own guilt, he is determined to do whatever he can to keep Holmes on this side of human existence.

Then, a couple with a curious missing person’s case comes to Holmes for help. A man has disappeared from a locked room. Police aren’t interested because there hasn’t actually been a crime. Then, there’s another missing person and another. With each new case, it becomes clear that something very strange and dangerous is afoot.

There are whispers of a secret cult and a box that open unseen doors. Eventually, Holmes and Watson realize what they are up against. To these logical men, it is a revelation that Hell exists and has been waiting for them.

Paul Kane has created a fun story the weaves together Sherlock Holmes’ canon and elements of the Hellraiser universe. I recognized elements from several of the films/books: the vagrant, the pillar with “something” missing from, Lemarchand etc. This story takes place before Pinhead, but (if you pay attention) you may recognize him in a brief, pre-Cenobite cameo.

In fact, there are lots of cameo appearances that span Clive Barker’s literary universe. This can be a little distracting at times. It is a bit like watching a movie and recognizing all the celebrities playing minor characters; for a moment, you are taken out of the present story.

Even though it draws heavily from the movies, don’t be fooled. You may think you know where the story is going but it goes in another direction.

I recommend this book. 🙂